Back pain and lifting

You’ll know how common back pain is. You might think though, that it’s an ‘older person’s’ ailment. But you’d be wrong.  According to Backcare

This year, Back Care Awareness Week runs from the 5th to 9th October 2020. Find out more about this event are here.

Here is what I mentioned about back pain and support at a networking meeting this time last year: https://soundcloud.com/user-532011203/back-pain-2nd-oct-2017

For me though, avoiding lifting heavy things, or not doing too much gardening, is the tip of the iceberg when it comes to understanding:

I say our, because in my third year as a trainee nurse, I woke up one morning with sciatic pain. To this day, I don’t know how I got through that shift on the ward.

I was fortunate that my mother managed to get me an appointment with an osteopath.  I can’t remember much about what he did but it meant I was able to continue my training and qualify. 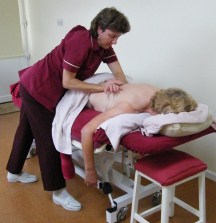 That appointment proved to be a turning point as I realised there were ways other than nursing, to help people get well.

I had learnt in year one, that health, as defined by the World Health Organisation (WHO) is:  ‘a state of complete physical, mental and social well-being and not merely the absence of disease or infirmity’.

This is what I wanted to help people achieve. Nursing was not doing this. Not for me as a health professional, nor the patients I was sticking needles into and giving medication that had undesirable side effects.

As a result, I chose to retrain in remedial massage. Yet, five years into my now successful business a sense of dissatisfaction haunted me. Why?

Because, although massage didn’t have the unwanted side-effects, clients had to return roughly every six weeks for treatment to keep the pain at bay.

I wanted to fix the bit between when my client left me feeling okay and when they returned for the next appointment back where they were.

It took a few more years of research and training, for me to understand and do something about what I now consider the three keys is to back pain.

This is a cause of back pain that most people know about. It’s the only one talked about in the media. And it’s the one mentioned earlier, which focuses on prevention and lifting. The questions that puzzled me with this way of looking at the problem were the following:

This is where my second step, also focused on prevention, comes in. It’s about understanding the connection between what is going on in our mind and how our body reacts to it. Every ailment/complaint/condition has its own mental pattern and in the case of back pain, it has to do with how we experience support – or, in this case, lack of it.

You might say ‘yes, my back supports me’ or ‘all I need is better lumbar support’. But that’s not what I mean.

The back is a representation of our support system, and our feelings of support by the people around us. In Western societies we tend to see money as our primary means of support. Though it extends to intangibles such as noticing and expressing gratitude for all the things/people that support our lives.

Many of my clients with back pain feel they’re not getting the support either at work or at home in the way they would like. As a result, they are tense, tight and often frustrated.

Part of the education I do with them, is helping them see how many other things in their lives that ARE supporting them. From the prosaic chair they might be sat on, to the bed they sleep in, to food from the garden, friends, the shops for providing the goods they want. The list goes on if we take the time to notice. Once they realise this, they recognise their expectations might have been unrealistic and some of the stress of not having things their way drops away. Some people refer to this phenomenon as an attitude of gratitude.

Too much to bear!

When I discovered this, it was clear to me why I had developed sciatic pain while nursing, thus answering the third of the questions I posed to myself.

At the time, I felt so frustrated. I struggled with being taught the most up-to-date way to do things –such as lifting patients, but not being able to put them into practice it on the wards, because the nurses wanted to do it the old way. I could not get my head round the side-effects of the drugs prescribed, especially when one was the same as the symptom it was supposed to treat, and how many patients were in hospital because of them. Yet when I brought these things, it seemed no one but me was the least bit bothered by all this. Hence I felt very unsupported.

It is obvious to me now, how much my wondering whether this was a career for me, was the weight on my shoulders which ultimately proved to be too heavy to carry, not the patients.

All of which forces me to ask if it’s the weight of the bags themselves or what they represent that is causing pain. I.E. is the heavy burden and pressure of SATs, exams and peer pressure at the root of the aforementioned statistics?

This step focuses on the treatments offered. The detail of this I may go into another time but for now I will deal with two things.

Treating Back pain with massage, or other hands on therapy usually deals with the back of the body, where the pain is usually felt. In fact, this is what I was doing when I started my practice. When I learned about the Psoas or Iliopsoas muscles – which one can only reach from the front of the body – and started treating it, in conjunction with the back, I got longer lasting results.

Doctors or physiotherapists, might suggest exercises. A recent client whose back pain was not improving, despite doing their exercises daily, discovered why. They demonstrated them to me and rather than use their core, they were arching their back to lift their legs. No one checks that the patients are doing them correctly. Which is something I mentioned in ‘why therapy doesn’t work.

People have commented to me that they couldn’t do Pilates – a practice meant to be helpful for back pain – because it hurt their back. This happens because no one wants to feel left out or different. So, when in a class, they try to keep up with everyone else, rather than having a slow build-up to a harder level when their muscles have become stronger.

If done incorrectly, exercises will actually cause back pain or make it worse.

I demonstrated and explained the correct way of doing the exercises given to my client. I modified a couple to make them suitable for them and checked how they did them. The pain began to decrease and a month on it has now disappeared.

So, for me back pain care is a combination of three things:

Have a lovely week caring for your back.

If you’re not getting the results you want,  contact me to book a taster session in exchange for a donation towards the Freedom Kit bag Charity I support. You’ve not much to loose but your pain.

I received this feedback last year after helping someone with their back problem:

My treatment with Julie came after a week of severe lower back pain. Because it was taking so long to heal, and had begun at the same time as a big change in family circumstances, I had a good idea there was an emotional component to the pain.

Julie’s approach was to help me identify the core underlying emotions and beliefs…for me there was fear of an uncertain future and a conflict around doing what I “should” do, as opposed to what I feel I want to do. There was also guilt around this conflict and the feeling I didn’t deserve to do what I wanted.

Julie’s questioning soon got to the core issues and we were able to work on these.  It was wonderful to have the time to look within and get to the bottom of things in such a supportive setting.  The bodywork that followed was also very helpful in practising how to ‘let go’ of these emotional patterns.  It allowed me to be less run by them and be more ‘in the moment’.

By the end of the session I felt lighter and had more clarity on what was going on in my mind and body. By that evening my back pain had lessened and by the next day I was moving normally again. I am confident it won’t take long to heal completely.  I’m grateful to Julie for playing a part in that.

I’ve come to realise that many (if not all) physical pain can have emotional issues as a root cause and/or keeping it going for long periods. Dealing with the pain on a bodily level might provide some relief, but a holistic approach like Julie’s is the key to long lasting healing. Thank you, Julie!