Eye Movement Desensitisation and Reprocessing  (EMDR) works on the basis that our eye movements are directly associated with our thought processes and therefore also related to emotional and mental stress.

EMDR  helps reduce your stress levels, depression, isolation, flashbacks, nightmares and/or intrusive thoughts, that get in the way of you fully enjoying you life.

Because EMDR changes how we feel about what we have  experienced, not numbing the feelings or understanding why we feel the way we do, it is quicker than the more usual treatments of cognitive behavioural therapy (CBT), counselling and psychotherapy for emotional distress such as  anxiety, anger, guilt or panic. EMDR also goes beyond the suppressing effects of anti-depressants drugs.

Unlike with CBT, there is no need to be physically exposed to the source of the anxiety.   You don’t even have to talk about what actually happened to make you feel the way you do (unless you want to), nor the whole of your childhood experiences and life up to now (as in psychotherapy), you share how and where you experience your feelings in your body. unlike hypnotherapy, You remain fully conscious throughout,

How does EMDR work?

This technique was developed by Dr Francine Shapiro, when she discovered that controlled eye movements encourage the brain to process disturbing memories and help people suffering from post traumatic stress disorder (PTSD).

The eye movements, similar to those that occur during the period of dream sleep known as rapid eye movement (REM), stimulate the subconscious. EMDR allows clients to change their perception of past events.

In the same way that if something annoying has happened at work, though we may still be upset when we get home, we usually have dealt with it after a few good nights sleep and often can’t remember it a few months later. This is because the brain processed the information during the REM sleep time.

A detailed case history is taken to identify the feelings associated with the disturbing memory, as it is the feeling, rather than the content of the disturbance, that is the focus of the treatment.

You can’t change what happened and understanding why it happened, won’t change how you feel. 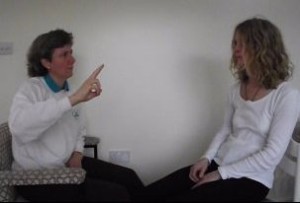 During a treatment clients follow sets of specific finger movements performed by the practitioner.   This sequence is repeated till there is a decrease in disturbance from the original memory.

Alternatively hand taps or sound can be used.

Clients usually notice a decrease in negative feelings and an increased sense of well-being after the first treatment. In severe cases, a series of sessions is often needed to ensure complete release.

Ideal for fear of public speaking, exam nerves, driving tests and other fears.
Improving your confidence and your relationships means better quality of life!

This is what a client said after one treatment:

“Dear Julie,
I thought you might like to know how I have progressed since seeing you.
I just cannot believe how much better I feel, nor how low I must have been before!!  Thank you so much for your skill and understanding which helped me so incredibly. The light at the end of the tunnel got brighter and brighter and now the sun is out all the time!!

My daughter came up this weekend and we got on so well, in a way that we used to.  It was wonderful!  She was so much better with me that it felt as if you had treated her with EMDR too!

My daughter asked me what you had done and I told her that you had helped me recognise my own worth and commented on a few other things that we had discussed but did not mention the main hurt problem.

Strangely I had waited for 3 years to mention the hurt and when the opportunity came at the weekend I found I did not need to open the subject and could walk forward with my head held high.  Wonderful!

Still hoping that the weight will fall away too.  I have lost 2 lb this week so it’s a start!
I will be sure to address any further problem with you in the future and not let it fester for so long”.   Patricia Kemp  June 04

Example of a fictitious person who benefits from EMDR:

Though this is fictitious, all the facts in this story are taken from scenarios that have happened.

Jane is in a very loving relationship and is happy in her job.  After a reorganisation at work Jane ends up with a new boss.  His name is Marc and he has a moustache.  As the weeks pass, Jane finds that she is not happy going to work any more.

She develops headaches and starts to think about what might be causing them.  She also notices she sweats more and starts to get palpitations when her new boss asks her to do something.  Jane just puts this down to hot flushes and the menopause.

Jane feels her boss is unreasonable with his time-scale to get work finished.  Thinking her boss is the problem, she decides it is time to look for another job, but can’t  find anything she likes. She is also worried that she would loose the benefits she has with her current employer.

She feels a bit depressed and decides to treat herself to a massage on her day off.  This makes her feel a bit better so she books to see me for another session as it helped relieve her headache.

This time she comes in for the treatment straight after work and has had a really bad day.  During the interview, when I ask her how she has been, she shares that she had an argument with her boss. She is scared she might get fired.  She is noticeably upset so I use EMDR to help reduce this tension.

I get her to remember how she felt when she had the argument with her boss and focus on where she feels it in her body.  After the 1st cycle of eye movements she is calmer. I then ask if she remembers a time when she experienced similar feelings.  She thinks she did but is not sure exactly when, so we go back to the argument with her boss and we go through the eye movements again.

Suddenly she realised that she was upset with her boss because he reminds her of a previous relationship.
She then reveals the following:

Jane met a guy who was very nice to her, so they start going out together.  His name is Mark and he had a moustache. As time went on Mark became more demanding. He expects Jane to call at a specific time and not a minute later or earlier.  Jane understands his reasons and tolerates his demands.

However as months roll on, he becomes aggressive and threatens to harm Jane or her family if she does not accept his requests.  As Mark became more and more abusive, she got the courage to leave. She though this was  all behind her.

After a few more cycles of eye movements, Jane feels much more relaxed . She can also differentiate between the demands of her ex boyfriend and those of her boss.

Jane goes home and talks to her partner about what she discovered. They realise that this had sometimes affected their relationship – when he wanted her to hurry, she would get snappy.

Her headaches disappeared and she began to enjoy going to work again.  Her boss was now a tool to help her be able to state her needs more clearly.  She grew in confidence and was generally happier..

Jane continued to have sessions, every couple of months or so. She enjoyed the feeling of relaxation and it was a way of congratulating herself for doing so well. This meant she was able to address smaller issues as they came up and keep up the progress.

If you are not sure whether EMDR can help your condition contact me. I am happy to discuss this with you, so you can feel confident this is right for you, before you have a treatment.